A huge part of being a writer is social media. You have to constantly engage your audience by posting clever pictures, comments, and interesting information. Many people think this is a drag. I, on the other hand, love the challenge.

“But I’m not good at that,” is a whine I often hear from writers.

You don’t have to be “good” at social media, but you do have to think outside of the box. You also have to be genuinely interested in what other people think and you have to know how to create stories that are delivered in segments.

As an example, a recent Facebook post (not mine) ran this photo and challenged readers to figure out what was wrong with it.

The expected answer was that the Charlie Brown gang was discriminating against Franklin (the black child) by making him sit all by himself on one side of the table.

I reposted the picture on my page with the following comment:

Oh for God’s sake. What I saw was that 40 years ago, a cartoonist was insightful enough to include a black child (as well as an arguably young lesbian) in a group of friends that played, worked, worshiped, and broke bread with each other.

Some people have too much time on their hands.

This started a discussion about Charlie Brown and the entire gang. Some people saw discrimination, others saw an innocent and happier time.

The direction of the comments took a turn (as they usually do when many people join in the conversation) and my readers started a discussion about the food on the table in particular that mysterious orange triangle on each plate.

I challenged my readers to come up with a recipe for “Charlie Brown Thanksgiving Orange Triangles” And to post the results the next day.

This is what went up on my page the following afternoon:

I know that everyone has been patiently waiting for this and so I give you: 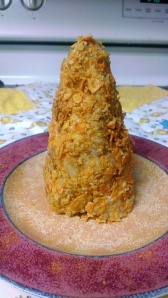 A bit later, I posted this:

And this is a picture of my daughter taste-testing the final product.

I had a few readers who had actually been waiting to see what I would make (they knew that if I said I was going to do something, then I would.) There were also a few who were carrying over some jokes from post to post – that’s what you want to see, that’s the sign of an engaged audience.

The point is that you don’t have to be “good” at social media in order to be good at it. Use a little creativity, have fun, give honest opinions that you’re willing to support (positive opinions generally work better than negative ones) and be interested in what your readers are saying and doing.

Also, use a little bit of your story structure training in your posts. If you notice that a particular post has gotten a lot of attention then use that to your advantage. Post about the topic again (in a new way, don’t be repetitive.)

If people started making jokes in the comments, then pull those out and figure out how to display or highlight them. People love to see witty remarks.

Just like you would in a story, create tension, delay your punchline. Keep them coming back for more.

For example, one of my readers had suggested that the triangle was Brioche. That comment was so out in left field that I almost fell out of my chair laughing when I read it. It was a brilliant response and an answer like that deserved to be recognized. So I commented on it and said how I could definitely see the Brioche in those triangles. I even thought about how I could make a Brioche orange triangle but decided to go with my stuffing and mashed potato one instead.

You might be thinking that this is all horribly calculated and fake, but I assure you it’s not. I love interacting with my readers (in fact I love doing it so much, sometimes I have to block Facebook and Twitter in order to get my work done.) Simply put – storytellers love to tell stories.

I don’t see and have never seen social media as a chore, instead I see it as a wonderful opportunity to creatively flex my storytelling muscles while playing in the same sandbox as my audience.