It’s funny how editing commonalities come in spurts. In the past few weeks, I’ve noticed a lot of wordy phrases that can be shortened to “because.”

That type of wording is great when you’re working on NaNoWriMo and every word counts as you strive to hit 50,000 words by November 30, but in everyday writing, brevity goes a long way to clear communication. 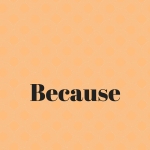 Which of each pair is cleaner:

The shorter sentences are easier to read, aren’t they?

What other wordy phrases can you think of that can be shortened to 1 or 2 words?

Lisa J. Jackson is an independent writer and editor who enjoys working with manufacturing, software, and technology businesses of all sizes. She loves researching topics, interviewing experts, and helping companies tell their stories. You can connect with her on Twitter, Facebook, and LinkedIn.

20 thoughts on “Grammar-ease: Using ‘Because’ in Place of Wordy Phrases”