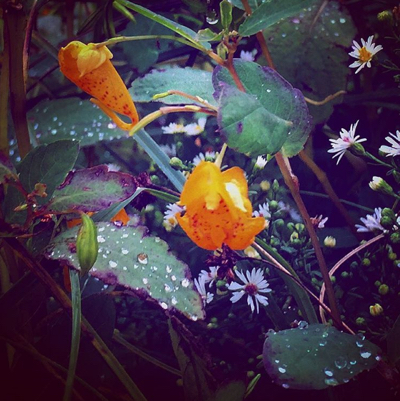 Autumn Vignette: And in the faerie bower they slept amidst petals of every hue and dewdrops that shone like jewels.

I’m keeping today’s post pretty short since it’s my birthday today, and I’m trying to spend as little time as possible behind the keyboard. I told all my clients in advance that I was going to be unavailable this weekend. (I’ve had a summer’s worth of working Saturdays and Sundays, and even freelancers deserve a break once in a while.)

Instead of working, I will be part of the volunteer team that is putting together our town’s annual “Ipswich Illumination” night. I think this is the third year we’ve held this autumn festival, and it’s become one of my favorite local events. Usually, we have bonfires floating on the river; but, because of the drought, our fire chief very sensibly decided to ix-nay the floating fires. As a replacement, we’ll be using paper lanterns lit with a non-flammable light source.  So, on Saturday morning our volunteer brigade will be spending several hours hauling eighty specially assembled inner tube rigs out into the low tide muck where we will anchor them with bricks. Hopefully – if all goes well – when the sun goes down, we’ll have eighty paper lanterns glowing softly as they bob on the surface of the river on their rubber rafts. Should be quite a sight.

I look forward to being back into my usual groove next weekend. Until then, I hope you enjoy the links below. Have fun exploring & I’ll “see” you next weekend!

I love when a book surprises me.

Such was the case with The Android’s Dream, which I just finished listening to on Audible as read by Wil Wheaton. (Yes, that Wil Wheaton.) I had never heard of the book’s author – one John Scalzi – before, which may or may not be a terrible oversight seeing as the man has (according to his brief biography) won many awards (including the Hugo and the Locus), worked as a TV consultant and a video game writer, and also been the president of the Science Fiction and Fantasy Writers of America (for three  years). Wow. Busy guy.

I picked up The Android’s Dream because it was on sale and the Audible write-up was intriguing:

A human diplomat creates an interstellar incident when he kills an alien diplomat in a most unusual way. To avoid war, Earth’s government must find an equally unusual object: A type of sheep (“The Android’s Dream”), used in the alien race’s coronation ceremony.

To find the sheep, the government turns to Harry Creek, ex-cop, war hero and hacker extraordinaire, who with the help of Brian Javna, a childhood friend turned artificial intelligence, scours the earth looking for the rare creature. And they find it, in the unknowing form of Robin Baker, pet store owner, whose genes contain traces of the sheep DNA. But there are others with plans for the sheep as well: Mercenaries employed by the military. Adherents of a secret religion based on the writings of a 21st century science-fiction author. And alien races, eager to start a revolution on their home world and a war on Earth.

To keep our planet from being enslaved, Harry will have to pull off the greatest diplomatic coup in history, a grand gambit that will take him from the halls of power to the lava-strewn battlefields of alien worlds. There’s only one chance to get it right, to save the life of Robin Baker – and to protect the future of humanity.

This book has a lot going on: political intrigue, alien coups, snappy dialog, technological geekiness, convoluted subterfuge, spiritual quests, epic fights, and enough snarky and from-the-hip one liners to keep a smirk on my face for the whole 10+ hours of listening. Several times, I found myself making comparisons to the works of Douglas Adams and Kurt Vonnegut. Yep. I went there.

The Android’s Dream may not be everyone’s cup of tea. There is a LOT of swearing. (I mean, a LOT.) There is also a fair amount of exposition in which the narrator provides somewhat opinionated backstory or general explanation about how such-and-such a thing works. Interestingly, while most schools of writing will warn you to steer clear of exposition, I found some of these passages to be very entertaining … even laugh-out-loud funny. There is also plenty of violence.

That said, this is also a book that made me feel kind of warm and fuzzy. Weird, I know, but true.

If you’re intrigued, but unsure, you can read the first chapter of the book for free on Scalzi’s website here. Love to hear what you think!

I have been enjoying the “micro” reads on Jenny Maloney’s blog, Place for the Stolen.  According to her About page, she has sworn to write 365 “Little Stories” in 2016. Lucky us! Here are two of my recent favorites:

Here’s to celebrations, changing seasons, and telling stories – big ones and little ones.
.

This post originally appeared on the Live to Write – Write to Live blog.
.