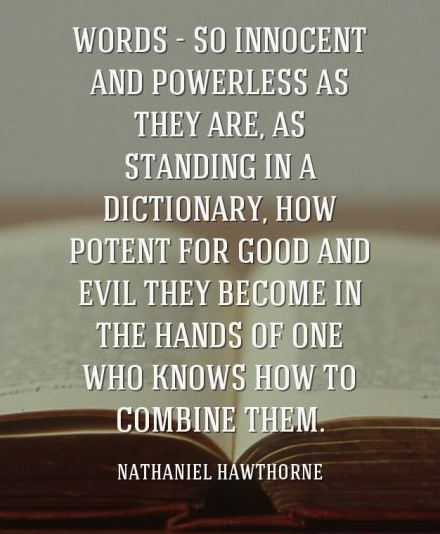 When we writers talk about “voice,” we are usually thinking of our artistic voice. I have written a number of posts about literary voice including this one and this one. But the changing political and social landscape of the country I live in has me pondering a different kind of voice.

The piece I’m sharing today is a column that I wrote for my local paper just before the election. I hesitated to submit it to my editor because both the topic and tone were a departure for me. Most of my columns, which are read by friends and neighbors and acquaintances that I may run into on the street, are about the seasons, family, and nature. My themes are usually about slowing down, taking time to appreciate the small things, and being kind to each other.

Despite the small voice of concern in my head, I did submit the column; and now that the election is over, I find that I am revisiting these words with renewed attention and a deeper sense of responsibility.

Politics is not even remotely my area of expertise. Growing up, I paid little attention to elections because I didn’t really grasp that the machinations of politics ultimately affected my life directly. For that reason, politics existed for me in a sort of blind spot. They were “important” but not “urgent,” so they routinely slid to the bottom of my priority list. Other than the discussions we had in social studies class, I was blissfully (in retrospect, embarrassingly) unaware of a great deal of what was going on in the world, never mind right here in the United States.

As a young adult, I tried to be more informed and I voted, but I still didn’t invest that much time in learning about the various candidates and issues that appeared on the ballots. I trusted my gut instincts (as untrained as they were) and typically voted along party lines. I did what I did more out of a sense of civic duty than a belief that I was actually making any kind of difference.

Then I became a mom, and the gravity of politics was suddenly much more tangible as I contemplated how certain political outcomes would change my daughter’s life for better or for worse. I no longer suffered from cynicism or apathy because my stakes in the game had changed.

And now we have this unprecedented election — an election that has been, without question, one of the most overwhelming, stressful, and depressing political events in recent history. What I’ve witnessed over the course of the last year or so has left me by turns confused, shocked, infuriated, disgusted, and terrified. And, I’m sure that voters supporting the other side of the ticket feel much the same as I do, only for different reasons. Fair enough.

The sordid details of this election have literally kept me up at night. And yet, except for a small circle of family and friends, I do not share my political opinions with many people, either privately or publicly. Though I have very strong feelings about certain policy topics and about certain questions of human decency, for the most part I unleash those feelings only within the privacy of my own home. After all, politics is not my area of expertise and — like religion — it is not considered a topic for polite conversation.

Because though I am not a political pundit, my voice matters. Just because the other person shouts louder doesn’t make my opinion any less valid. I may be relatively new to the political arena, but I’ve spent a lifetime as a human being, which makes my insights just as valuable as the next person’s.

As the grueling campaign journey begins to wind down, I have found myself drawn to the middle-grade fantasy adventure novels that I loved when I was a kid. At first, I didn’t recognize this pastime for the coping mechanism it is; but once I’d thought about it, it made perfect sense.

Those stories are the ones in which the heroes and heroines are smaller, younger, and less well equipped than their foes. The protagonists in those tales aren’t experts and their opinions are often ignored by grown ups. But despite their lack of resources and experience, the kids always figure out a way to defeat the monster and save the day. And as they battle their foe, the kids learn and grow. They find the confidence and courage to speak their minds.

Politics will never be my area of expertise, and it may never be yours, either. But that doesn’t mean that our votes and voices don’t matter.

This post originally appeared on the Live to Write – Write to Live blog.

Site Admin Note: Over the next few days, we’ll be moving nhwn.wordpress.com to nhwriters.org. If you have trouble reaching us, we hope you’ll be patient as the new domain name resolves. Thanks so much from the NHWN Team.