My first post was supposed to be at the end of December. It was titled, “What did you write in 2017.” But then my snarky inner voice chimed in, “did you even write anything in 2017?”

Of course I wrote.

I wrote cover letters, thank you letters, and condolence letters.

I wrote newsletters and love letters.

I wrote finance reports, grant reports, and project reports. I wrote e-mails (so many e-mails).

Most of my writing is anonymous or functional. The majority is both. It is technical writing, which means it is a step in a process, but not the final product. The benefit s of this type of writing is that it is published, it is read, and it is paid. The downside is that my writing is functional. It is more likely to alter someone’s to-do list than their sense of wonder.

My favorite part of being a pen-for-hire is knowing my purpose. My audience varies from officers at the Environmental Protection Agency, to parents at an after-school program, to clowns. When I sit down to write, the first question I ask myself is “who will read this”? Followed closely by “why am I writing this.” How I write, and what details I include, vary based on the reader.

This clarity can be a double-edged sword, especially when it comes to creative writing. One of the biggest challenges I face when I sit down to my creative projects is a sense of purpose. There is no deadline. There is no guaranteed paycheck. And, most troubling, there is no audience. 2017 wasn’t exclusively a year of functional writing. I also I wrote two plays, two performances pieces, and six (and a half) short stories. Some of these pieces have been performed or shared in a workshop, but most have only had an audience of one (me).

One of my goals for 2018, is to get more work in front of an audience.

That’s where you come in. 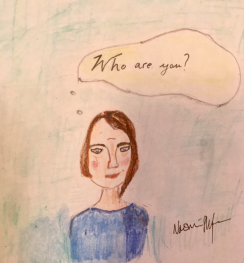 The trouble is, I don’t know you.

Who are you? What do you want to read? What brings you to Live To Write, Write To Live?

I’m excited to write about: making time for a writing practice, combatting self-doubt, sharing unfinished work, and blogging ethics. What do you want to read?

I look forward to reading your responses in the comments and getting to know you!

Naomi Shafer is a writer, performer, and project manager. She works for Clowns Without Borders. Her written work has been performed at an array of theaters, including Actors Theatre of Louisville, Middlebury College, the New England Youth Theatre, and Peppercorn Theatre. She has dueling degrees in business and playwriting.

38 thoughts on “Know your audience (Who are you?)”