A friend recently tagged me on Facebook to participate in one of those modern-age chain letter-type things where you’re tasked with sharing a series of something-or-others within a specific theme. For instance, you might be asked to post seven black-and-white photos or six baby pictures or ten favorite poems.

The mission of this particular challenge was to post—without comment—covers of books that have meant something to me and/or influenced my life. This was exceedingly difficult. Not only did it require me to whittle down my list of influential books to only seven, it also demanded that I refrain from sharing any thoughts or wistful reminisces about my relationship with each book. I’m sure, as fellow bibliophiles, you can see my dilemma.

Still, I was moved to play along, because—you know—BOOKS.

But now, I am breaking the rules by re-sharing my seven selections along with brief commentary that provides a little of the back story for each book—how I discovered it, when I read it, why it matters in the overall scope of my reading life. I hope you enjoy this peek into my love affair with books, and I’d love for you to share something about your favorite reads in the comments.

I made my first selection based on instinct and whim. I do love Kurt Vonnegut, and Galápagos is one of my favorites, but I was a little surprised at the way this one jumped to the front of my mind as my initial response to the question about books that have influenced my life. While you can probably tell by the battered nature of this mass media paperback, I’ve had this book in my collection for quite a while. I honestly can’t recall when I first read it, but the copyright on my edition is 1985, with a cover price of only $4.50. You do the math.

This book has stuck with me over the years because its commentary on the human condition and our role on planet Earth is somehow both sublimely ridiculous and deeply tragic. There are passages that are laugh-out-loud funny, but themes that make me worry for the fate of our species (not to mention all the other species with whom we share the planet). And yet, through it all, there is a thread of hope that runs through with a quick smile and a reassuring sense of the absurd. It’s marvelous, really.

My second pick took me in a completely different direction. Women Who Run With the Wolves is the seminal work of Clarissa Pinkola Estés, Ph.D.. As the subtitle explains, this is a book about the myths and stories of the Wild Woman archetype. It is a book full of deep wisdom and revelation, comfort and challenge, mystery and insight.

Like Galápagos, I have had this copy for a pretty long time. Not a lifetime, but long enough. I chose it for my list of seven even though, truth be told, I have never finished reading it all the way through. It is a book that I have returned to at different times throughout my life, visiting its pantheon of wise and wild women as I need them. Many of the pages are heavily underlined and annotated (in pencil, of course), bearing witness to prior visits. I always find it interesting to see which lines and ideas called to me at different times in my life. My attention has shifted over the years.

I know that one day I will have read this book all the way through, probably multiple times; but—for now—I count it among my favorites and most influential despite having not yet discovered all its stories. Sometimes, leaving some of a book’s secrets unopened is a good thing. It’s nice to have something to look forward to, and I have no doubt I will unwrap each remaining story at exactly the right time. 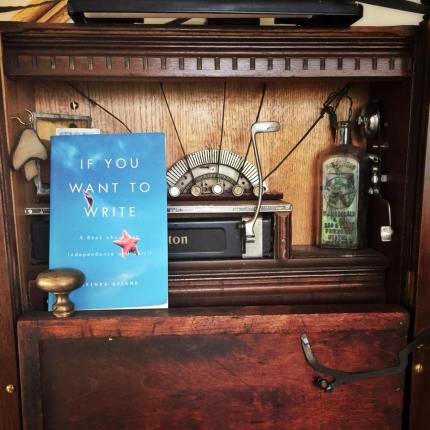 If You Want to Write by Brenda Ueland is the only book on writing craft that I included in my list. As I have shared previously on this blog, this slim tome is aptly and, I think, beautifully sub-titled: A Book about Art, Independence and Spirit.

There is hardly a page of my copy that isn’t criss-crossed with pencil underlinings from previous readings. In some places, I’ve actually drawn hearts and stars in the margins. Originally published in 1938, this book is surprisingly relevant. With a gentle, but no-nonsense voice, Ueland quietly transforms the often overwhelming task of writing into a simple magic that feels simultaneously accessible and miraculous.

If you have ever felt daunted by writing or doubtful about your right to write, please read this book. I promise you that it will warm your heart, ease your mind, and stoke your creative fires. It has certainly done so for me over the years. In fact, I think it might be time for yet another re-read of this old favorite. 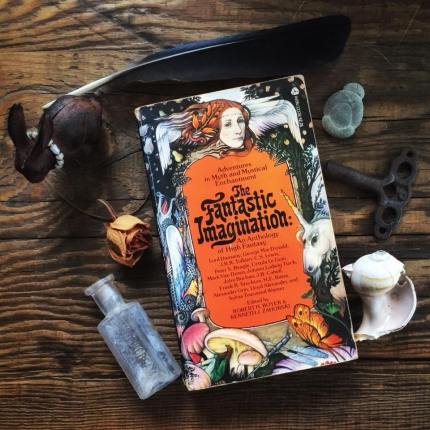 Here again, the age of this old friend is hinted at by the copyright (1977) and the retail price ($2.25). Given that I was born in 1969 and my vague recollection of having purchased this book while on a cross-country family road trip that took place the summer after I graduated the sixth grade, I would estimate that I was eleven or twelve when I first read this book. The Fantastic Imagination—An Anthology of High Fantasy— is a marvelous collection of “Adventures in Myth and Mystical Enchantment” from writers like George McDonald, J.R.R. Tolkien, C.S. Lewis, Peter S. Beagle, Ursula Le Guin, Lloyd Alexander, and many others.

I remember buying this book at a small, independent bookstore somewhere on the west coast. It may even have been an old-fashioned newsstand kind of establishment, like the one we used to have in my home town (but which, sadly, burned down and was never rebuilt). I have a vague recollection of the scent of pipe tobacco and of dingy shelves, tourist postcards and maybe a selection of snacks. I don’t really have any other concrete memories of the sights and sounds of that place, but I do remember clearly the feeling of choosing that book for my own. I remember the sense of anticipation for all the magic to come, a tingle of excitement, and the delicious warmth of book ownership. Even today, this book still inspires that feeling. Even after all these years.

When I learned of Ursula K. Le Guin’s passing, it was the first time I shed a tear over the loss of a beloved author. I grew up reading her stories of Earthsea. I practiced speaking to dragons and tried to learn her runic languages. In her stories, I felt I could see clearly the contrast of light and shadow and their eternal struggle and dance. I loved the way her stories connected so deeply to the natural world, helping me to see magic and wonder in even the most mundane of settings. She taught patience and loyalty while also kindling the young flames of courage and fierceness in my heart.

I recently reread A Wizard of Earthsea and was impressed by the way Le Guin’s story has stood the test of time. Soon, I will journey to the Tombs of Atuan and the Farthest Shore as well. I’ve been away too long. There are old friends I need to see and old lessons I need to relearn.

My mother has told me that I first read The Hobbit and The Lord of the Rings (LOTR) trilogy when I was only in the third grade. While I cannot myself pinpoint exactly how old I was when I first picked up J.R.R. Tolkien’s masterpiece works, I do remember checking them out of our public library. They were hard copy editions that were shelved not in the children’s room, but in the grown-up upstairs of the library. In fact, they were kept just to the left of the circulation desk, at a height that caused me to tip toe up to reach them. I remember embossed covers with bits of gold ink and worn bindings secured with librarian’s tape. I know I borrowed them multiple times before eventually acquiring my own copies.

LOTR became a staple for my whole family. We bootlegged the 1981 BBC dramatization, which was broadcast in the U.S. by NPR radio. I listened to those cassettes so many times, I wore them out. Happily, many years later, all twelve episodes were released on CD. And now, I also own digital copies via Audible. I listened to that adaptation so many times that I can recite various passages by heart, which is to say that I can recite passages from the book because the script for the BBC production was very faithful to Tolkien’s original works.

When Peter Jackson’s movie version of The Fellowship of the Ring was released in 2001, my whole family went to the theatre together, and then to dinner where we expressed great relief that Jackson had done such an admirable job of adapting the stories to screen. (We didn’t want to have to hunt him down and give him what for.) To this day, I often turn to LOTR when I need some comfort, or when I need to be reminded of the power each of us has to make a positive change in the world.

Finally, for my last selection, I cheated again (as I’d done by combining The Hobbit and LOTR into one pick), and included several books as a single selection. In the case of Tolkien’s works, they are all part of one long story. But in the case of this collection of children’s board books, they are each a unique facet of my daughter’s young childhood, linked only by the number of times we read each of them. We’re Going on a Bear Hunt, Runaway Bunny, Goodnight Moon, Snow Bears, Big Red Barn, Let’s Go Visiting, I Love Animals, Carl’s Afternoon in the Park, and Jamberry … oh, how I adore these books!

The original challenge was to share books that had meant something to me and/or influenced my life. These books, though I only discovered them when my daughter was born and I was thirty-four years old, most definitely fit the bill on both counts. These books are a treasure, each one capturing the warmth and joy and wonder and love shared between mother and daughter during some of my daughter’s most formative years. I cannot even count the hours we spent with these books. How many bedtimes and naptimes and every other time between?

Though their cardboard pages are worn and even peeling, their colors are still bright and the stories they tell are still vibrant and full of the exuberance of a child’s heart and mind. I hope that they will serve, forever, as an anchor for my daughter’s heart. I know they will be that for me until the day I die.

Jamie Lee Wallace I am a freelance content writer, columnist, and aspiring fiction writer. I’m a mom, a student of equestrian arts, and a nature lover. I believe in small kindnesses, daily chocolate, and happy endings. For more from me, check out the archives for the  Saturday Edition and Sunday Shareworthy posts. Off the blog, please introduce yourself on Facebook, Instagram, or Pinterest. I don’t bite … usually.
.